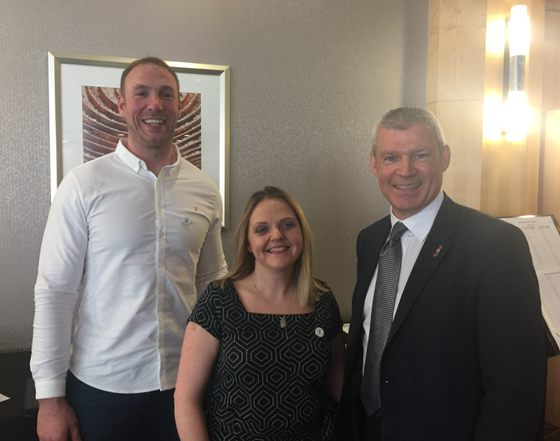 HPMA NI hosted a conference in the Hilton Hotel, Belfast looking at the theme, “A Whole New World: We Can Make This Happen”

Healthcare People Management Association NI focused the conference on the new HSC Leadership values which will be launched in March 2019.

These values are Excellence, Openness & Honesty, Working Together and Compassion.

Former Ulster, Ireland and British and Irish Lion legend Stephen Ferris took part in a special ‘live’ interview and Q and A session focusing on the relationship between resilience, teamwork and success- from the rugby field to the office.  Stephen was joined on stage by Sinead McNicholl, our Director of HR and Operational Development and hosted by Group Director of Inspire Professional Services John Conaghan. Sinead shared her experience of embedding staff wellbeing and resilience frameworks in the public, private and charity sectors.

Stephen spoke of his career highs and lows, referencing his injury on the Lions Tour, his current role as a commentary delivering tough messages to former colleagues and friends, maintaining a supportive team culture, empathy and reflection. Stephen also spoke of the looming Rugby World Cup and the importance for players to be their best because that’s how to reach shared goals.