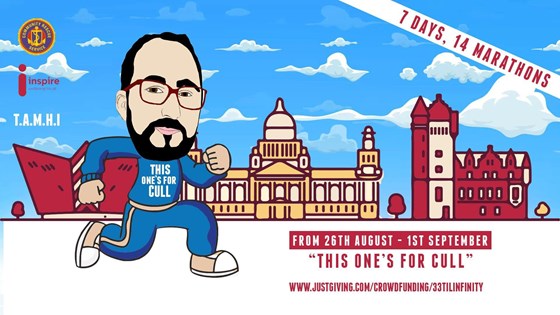 Brian McGeown is aiming to raise money for mental health organisations by completing an arduous week-long test of his own physical limits.

Brian, an endurance running enthusiast, has previously aided charity by conquering a 262-mile, five-day trek from Cork to Belfast and four marathons in a single 24-hour period.

He is now upping the ante to take part in 33 ‘Til Infinity, an initiative founded by the friends of 33-year-old rapper and artist Michael Cullen, who took his own life in early 2018. It aims to generate £33,000 in support of a range of local suicide prevention and intervention charities.

Brian is attempting to finish 14 marathons over the course of a week, a formidable feat that began in earnest on Monday 26th August. His latest undertaking will commence and conclude in Belfast, with a variety of stops, across all six counties, in between.

“I’ve lived with my own personal problems and associated mental ill health in recent years,” he says. “I want to prove that I can overcome this challenge, that I can realise this goal.

“The 33 ‘Til Infinity campaign is also central to my reasoning. In my own experiences, I found it essential to seek assistance from family and friends. People need to be encouraged to do the same if they are struggling with their own issues.

“Just as important was recognising that services exist for anyone who feels overwhelmed or hopeless. Having life is an amazing gift, so just asking for that bit of help is vital. I want to heighten awareness around these facts and would encourage the public to back the cause.”

Brian is calling on fellow runners to accompany him as he faces the final 3.3-mile leg of his journey on Sunday 1st September: “Having already covered 363 miles, I would be delighted for anyone to come along for that last stage. If you’re free, you’re more than welcome to join me on the home straight into Belfast City Hall. I want us all to remember Michael Cullen, support the families and friends of those who have died in similar circumstances and promote our own wellbeing.”

If you wish to support Brian, you can donate here.